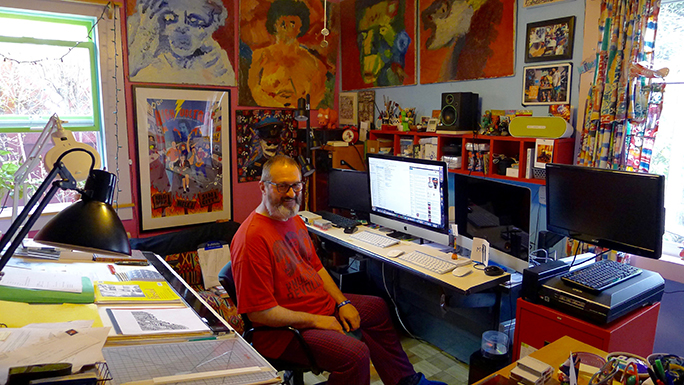 Michael LaBash was born in Indiana but was raised in Sydney, Australia.

After high school, he returned to the U.S.A. and attended Indiana University. He graduated in 1981 with a B.A. in Fine Arts and was elected to Phi Beta Kappa.

After spending the summer doing a prized graphic design internship at the National Zoo in Washington D.C. he moved to San Francisco at the beginning of 1982.

In San Franciso, he worked either full-time or freelance for many of the top design firms such as Primo Angeli, Steinhilber Deutsch & Gard and Spiegelman & Associates designing everything from corporate identity programs to magazines to package design.

In the mid-80s he spent a few years working exclusively as a freelance designer, mostly designing packaging for the software game company Electronic Arts. Some of the titles he designed include John Madden Football, Populous, Powermonger, Mail Order Monsters, Julius Erving and Larry Bird go One-On-One and the Bard's Tale series.

Also during this time, he started a recording studio, Dancing Dog, in Emeryville and was the singer/songwriter in the band Mr. Dog, which later became The Counting Crows ... but that's another story ...

In 1988, he accepted a position as Senior Designer at Spiegelman & Associates. There he designed many award-winning magazines, logos, and packages.

In 1993 he started his own design company, Michael LaBash Graphic Design, which he still operates at present. He designs for both print and the web and examples of his design work can be found at the designbymikee.com web site.

He is now available for your next project!

Visit the contact page to get more info and inquire about pricing.